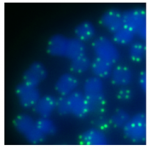 Dervan had reported a certain polyamide containing N-methylpyrrole and N-methylimidazole, designated PIPA, bind to specific nucleotide sequences in the minor groove of double-helical DNA with high affinity and specificity. During the last two decades considerable efforts have been devoted to synthesis and characterization of PIPA focusing on gene-control.

Although telomeres are believed to have important roles to stabilize and replicate chromosome and a tandem hairpin PIPA probe to identify telomeres (initially reported in 2001, Reference 1 ). Significant progress in telomere research has not been envisaged, while there has been an absence of commercially available efficient probes. Telomere has the simple nucleotide sequence (TTAGGG) at the terminal region of chromosomes. The length of telomere is believed to be associated with aging or cancer diseases. Until Prof. Sugiyama’ group published (2013, Reference 2) a tandem polyamide recognizing repetitive sequences of vertebrate telomere had not been confirmed and probes recognize telomere DNAs had not been prepared.

Recently we commercialize a PIPA (Product Name HPTH59) as an optimal probe for telomere staining. The present fluorescent labeling HPTH59 is nuclease resistant and enters into cell nuclei without any delivery systems and direct visualization of telomere is possible. Comparing to the other methods, such as  telomerase based antigen-antibody reactions, Southern blotting and/or PNA-fluorescence in situ hybridization (FISH) method, the present probe can offer simple with lower background staining.

One cyclic peptide immobilized on One Bead